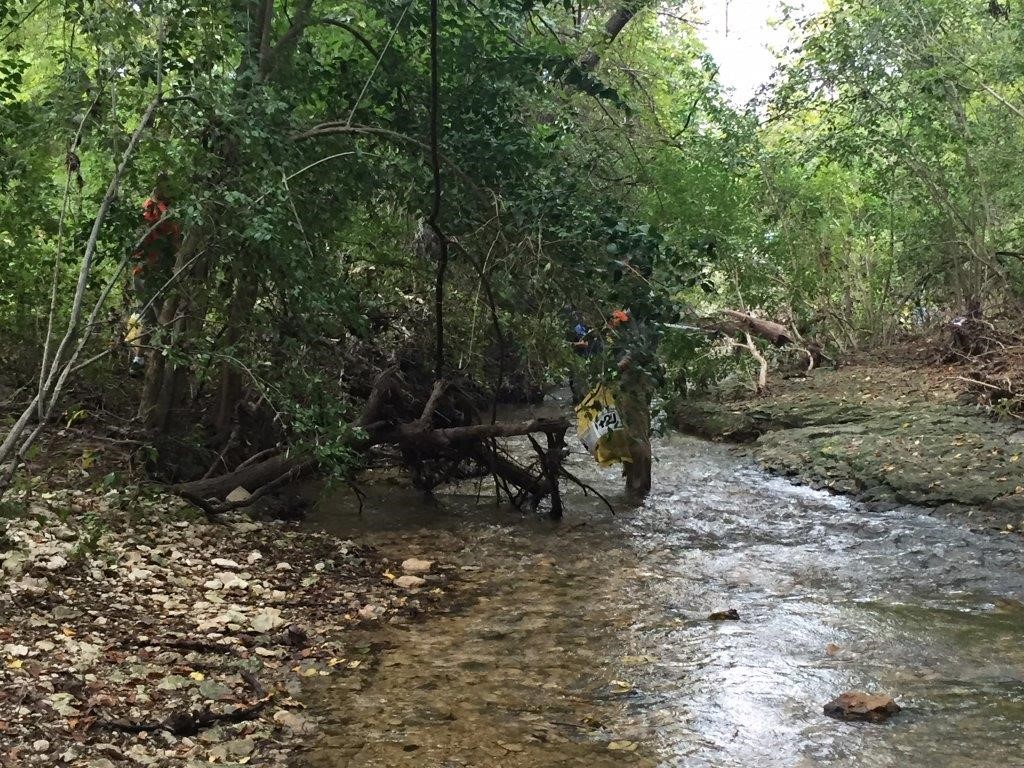 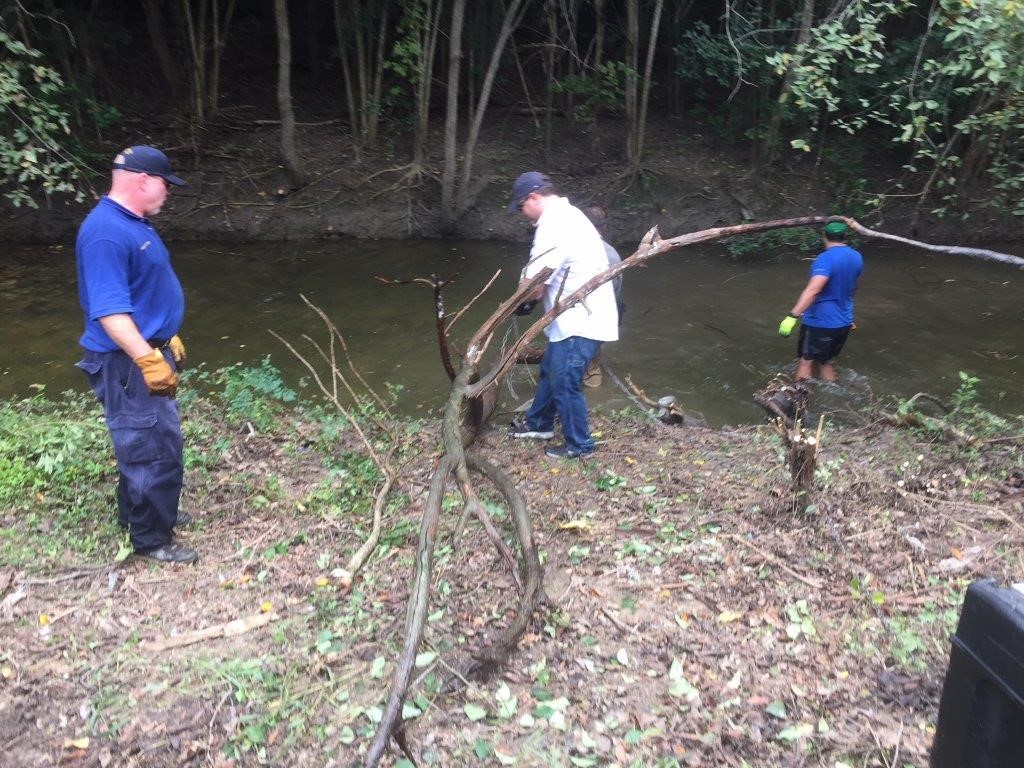 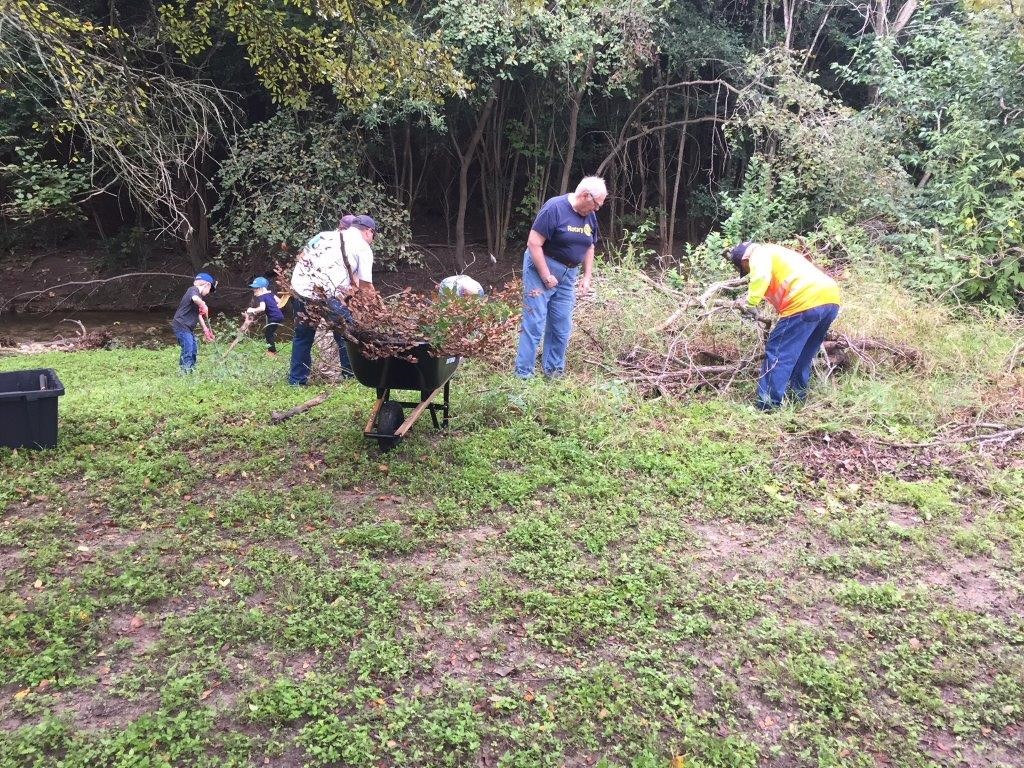 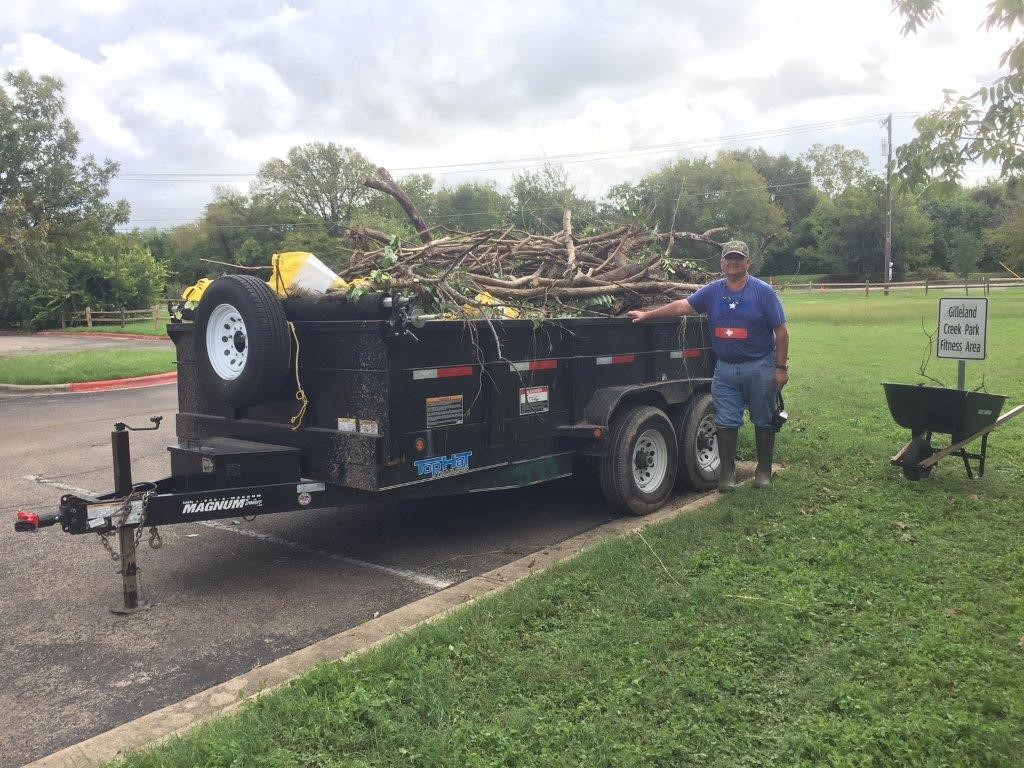 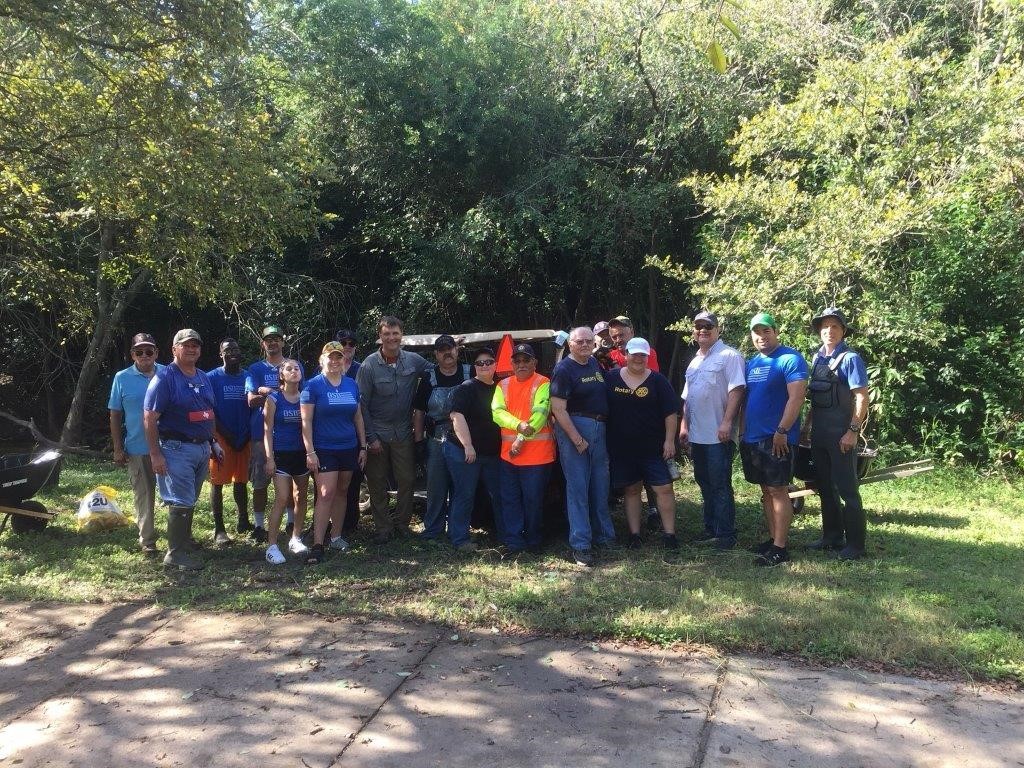 The event was organized by the City Community Services Coordinator, Mr. Eddie Garcia.  Volunteer participants included the Rotary Club of Pflugerville, The INTERACTOR (youth group of rotary), American Legion Kerlin-Lyerly Post 154 of Pflugerville, the Pflugerville HS Key Club, Operation Supply Drop, and the City Environmental Specialist.  Participants met in the Gilleland Creek Pool parking lot at 9 AM and worked until 11:00 AM removing trash within the creek bed and along the banks from Railroad Ave. to the first upstream pedestrian bridge crossing.  In addition, large pile of dead limbs was removed from the creek bank in Gilleland Creek. 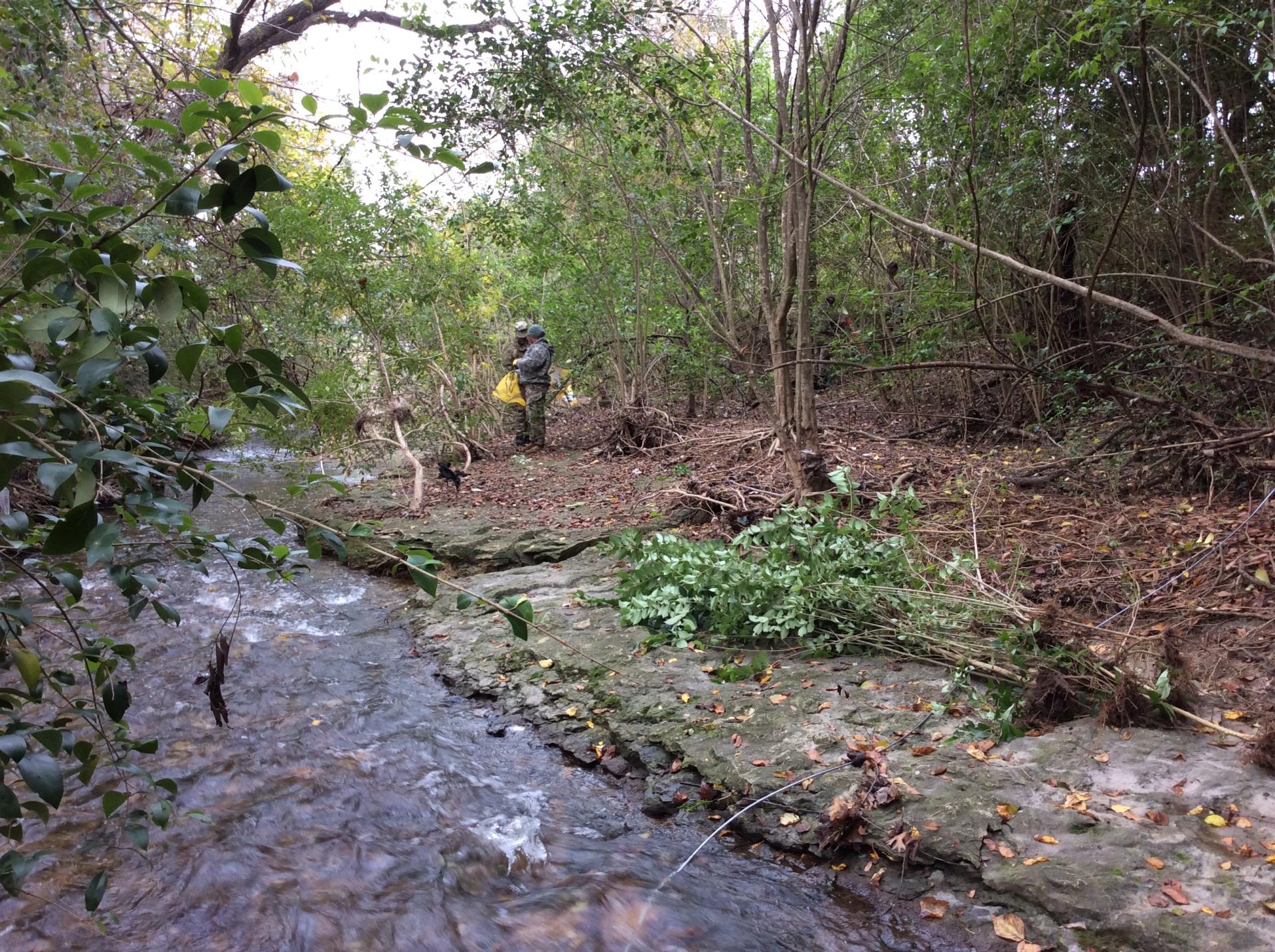 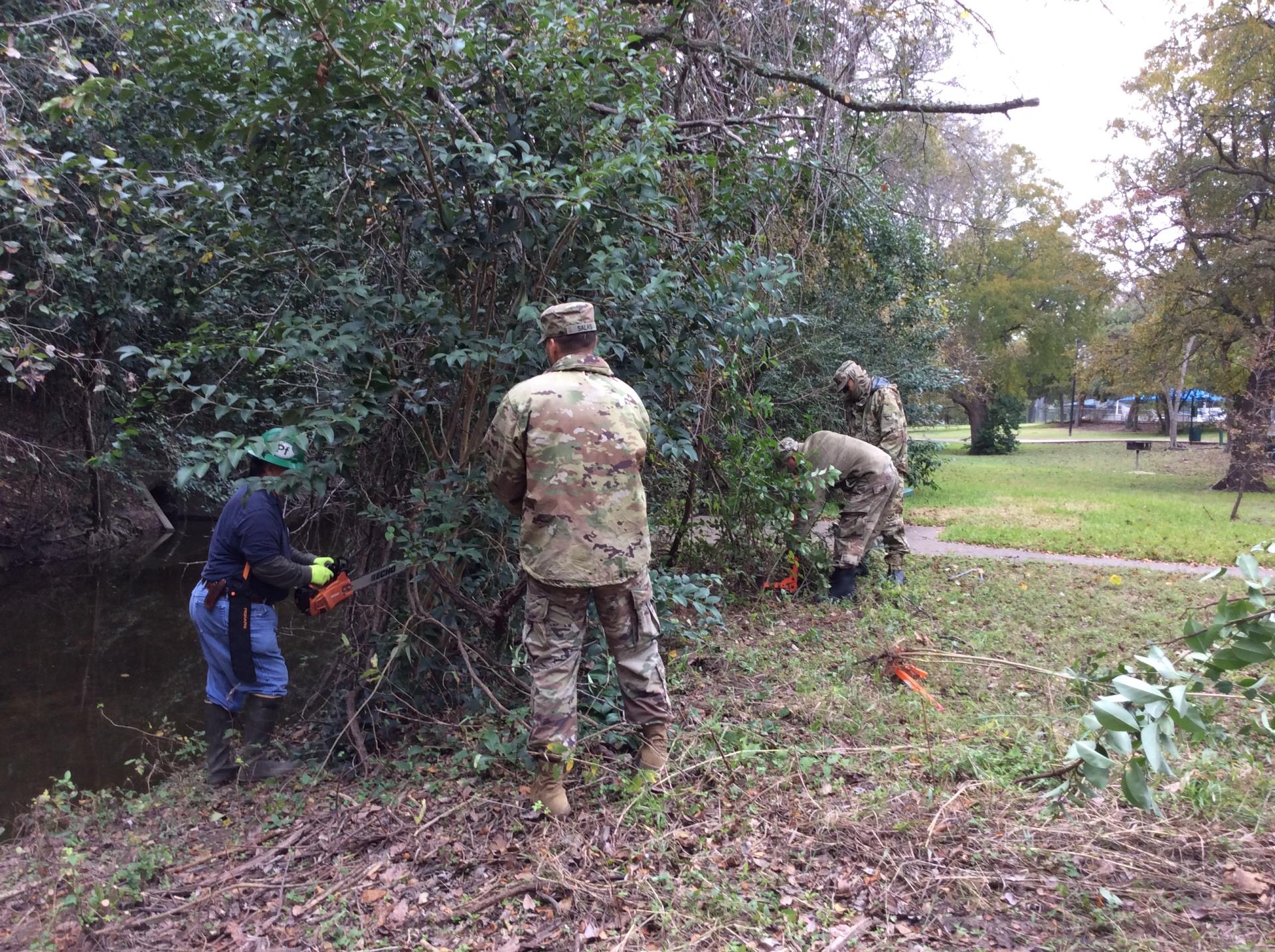 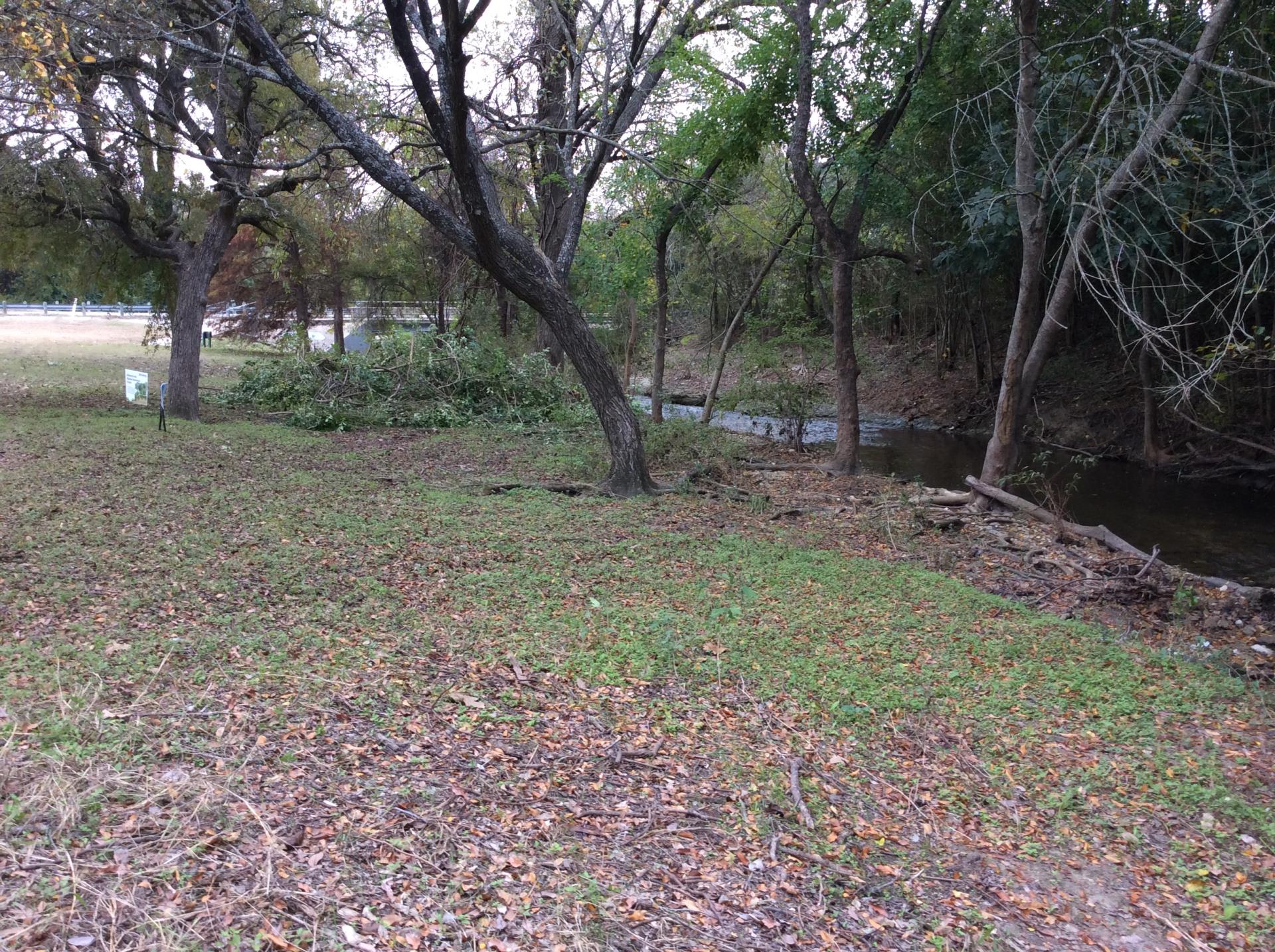 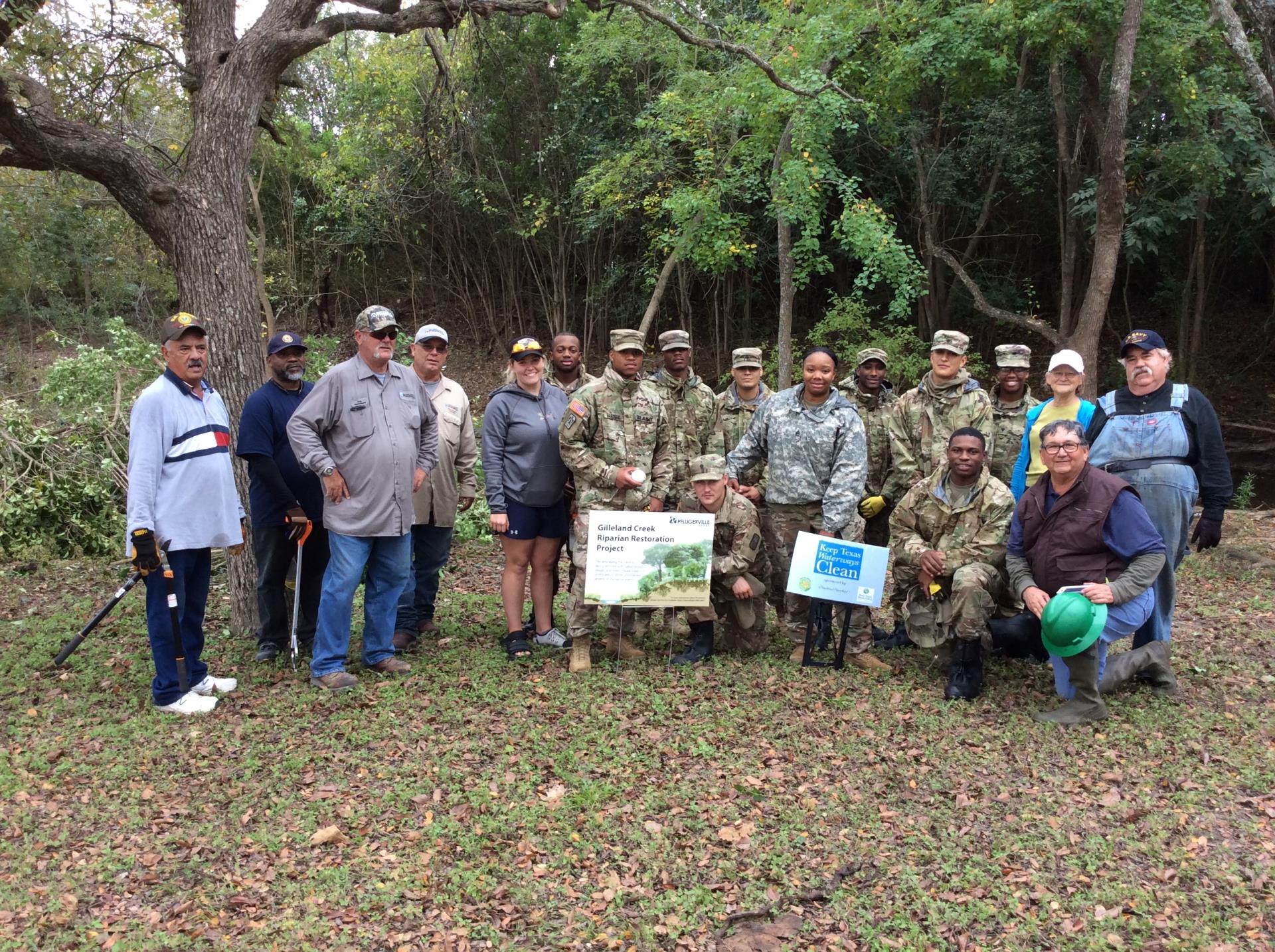 This project event was the first effort in removing invasive plants (primarily Ligustrum, a.k.a. privet).  The first phase of the project is along the creek from the Railroad Ave. bridge to the first pedestrian crossing in Pfluger Park.  Volunteer participants included the 57th Signal Battalion, Rotary Club, American Legion Post 154, Operation Supply Drop (OSD), and some local residents.  City employee participants included Parks and Recreation staff, and the Environmental Specialist from the Engineering Development Dept.  Participants gathered and began the event in the Gilleland Creek Pool parking lot at 8:30 AM and completed work activities at 2:30 PM.  The event was “fueled” by a pizza lunch provided by Ms. Shelby Pausewang, Team Lead of the Central Texas OSD.  A volunteer of particular note was Ms. Jean Pfluger whose parents, Leon and Gladys Pfluger dedicated the 30 acres of creek side land to the City for community park development.

Participants worked in a concerted effort removing privet, poison ivy, tree debris, and trash along the creek for a distance of approximately 200 ft.  Tools used in the effort were weed wrenches, loppers, hand and chainsaws.  An All-Terrain Vehicle (ATV) equipped with a cable and a tractor equipped with a grabber were used to move the cut privet limbs to a trailer for transport to the Recycling Center.  Three trailer loads were transported, prior to the use of the City’s chipper.  One chipped trailer load was transported to the Recycling Center at the end of the event.  The following day, Streets and Drainage employees transported two additional trailer loads of limbs to the Recycling Center.  Touch up work is planned for the following week, which will include cutting the stumps to ground level and seed application along the cleared north bank.

This event is the beginning of a “work in progress” that will be conducted by caring people that are invested in maintaining the health and natural beauty of the park, creek and associated riparian area.  Consultation will be provided by riparian restoration experts from Texas A&M Forest Service, Texas Parks and Wildlife, and City of Austin. 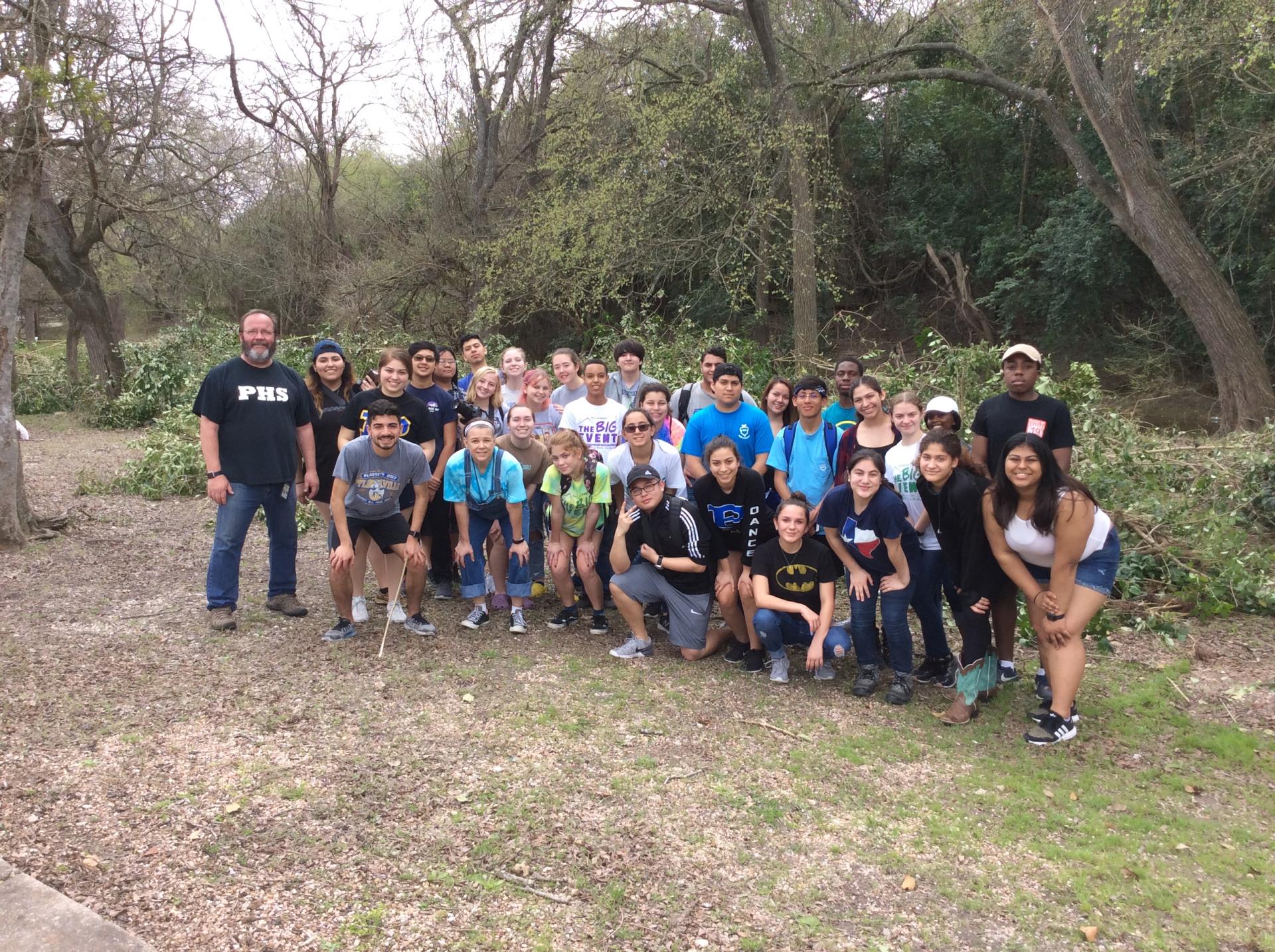 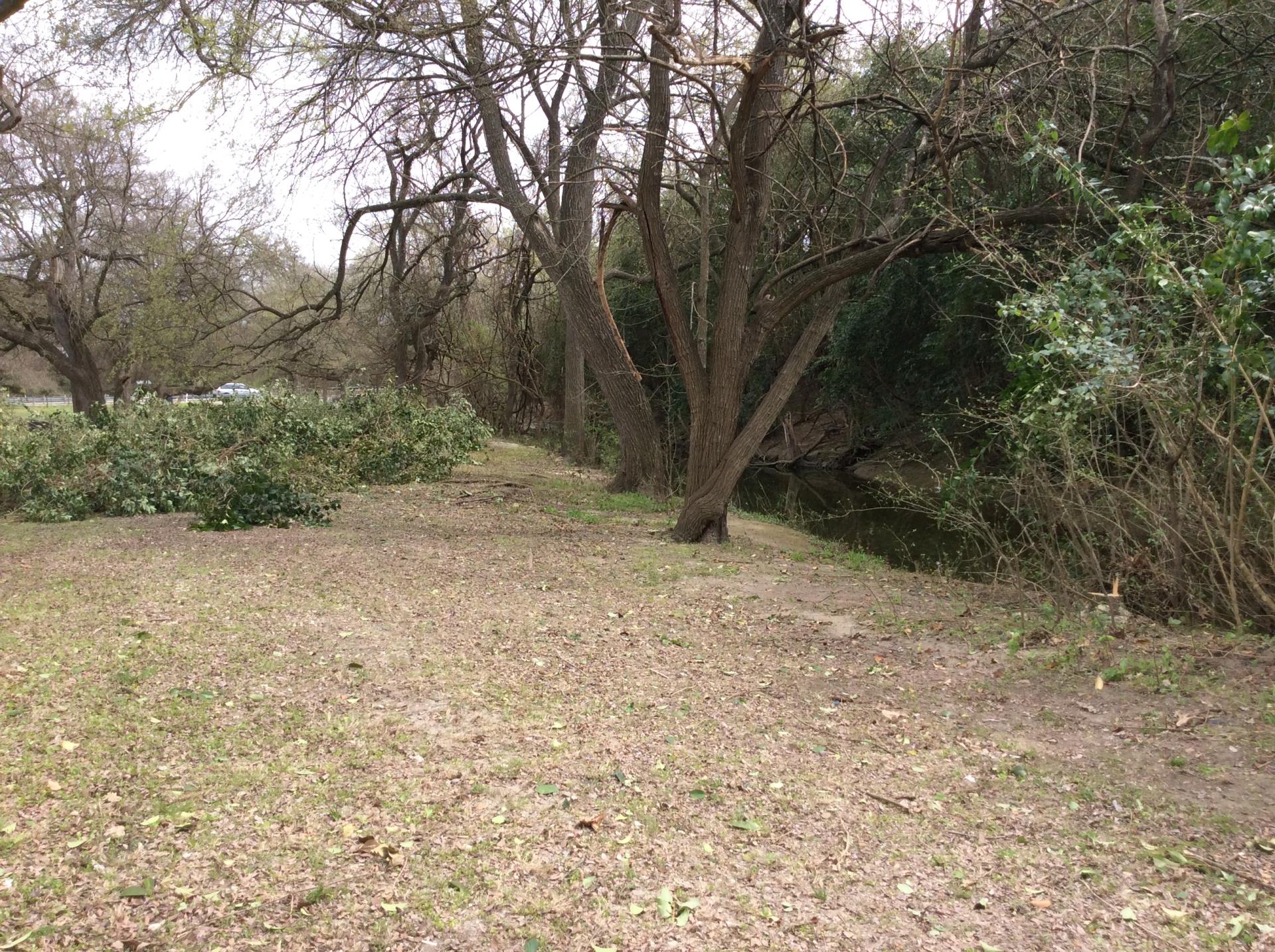 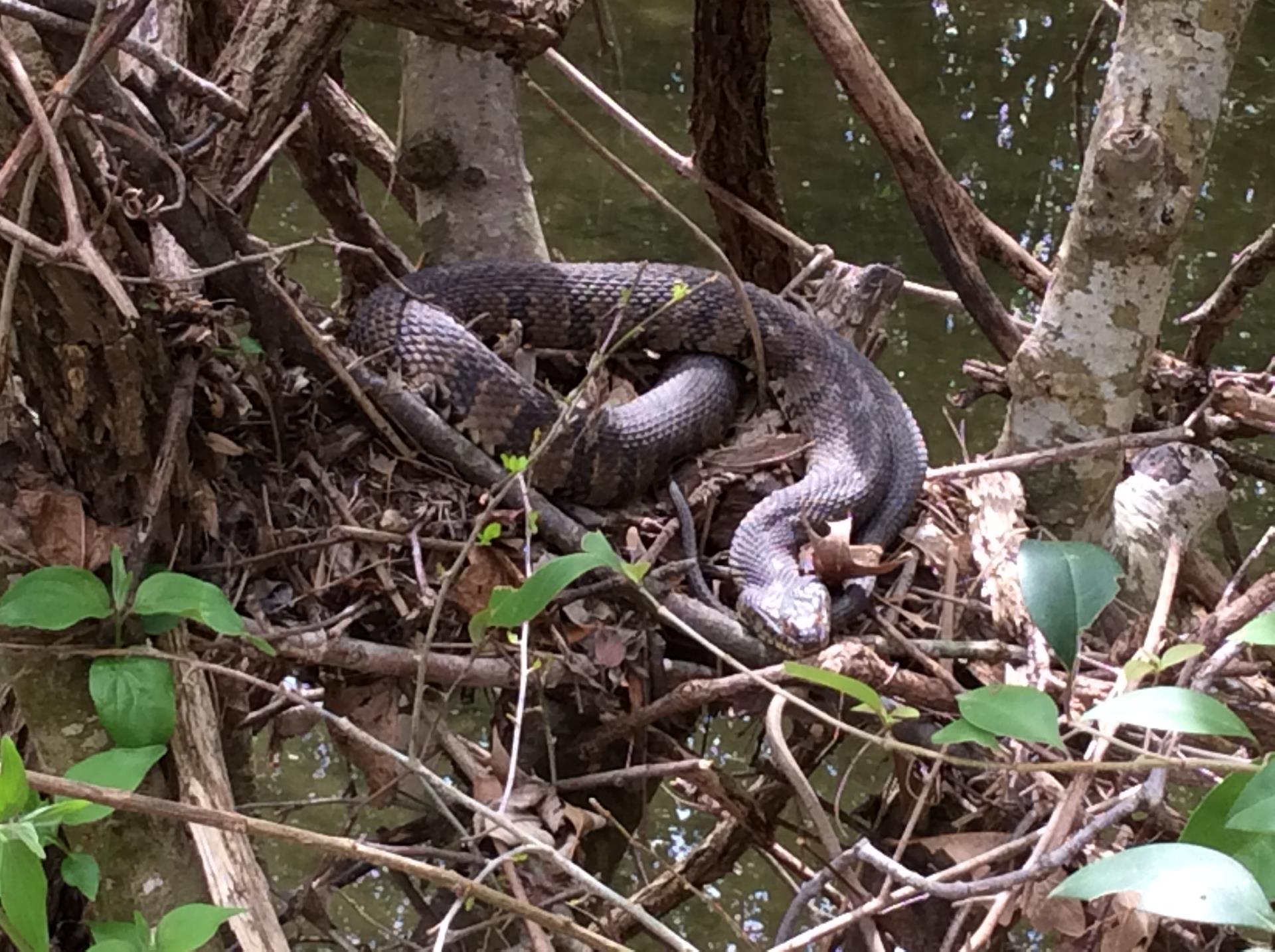 This project event was part of the 2019 “Big Event” in which approximately 3,300 high school students from the Pflugerville Independent School District volunteered doing outdoor maintenance at City parks and other public spaces.  Gilleland Creek Riparian Restoration project received 31 Pflugerville High School students and their Science Teachers, Mr. Rob Quarles and Ms. Autumn Hendrickson.  Other workers included the City’s Environmental Specialist and Parks Department staff.  The invasive plants removed were primarily Ligustrum, a.k.a. privet.  Privet, dead plant debris, and trash was removed along the creek’s north side for a distance of approximately 200 linear feet, extending from the previously cleared area just south of the Gilleland Creek swimming pool parking lot.  At one location along the creek, students encountered a rather large nonvenomous diamondback water snake that remained on its perch for the entire time.

Students and their teachers arrived at the project site at 9 AM and worked to 2 PM.  Using only weed wrenches, loppers, hand chainsaws, a chainsaw, determination and muscle, the participants removed a significant amount of privet as seen in the upper left photo (before) and lower left photo (after).  In the newly cleared area along the creek, grass and riparian plant seeds were spread, stumps were treated to prevent regrowth, and caution tape and signs were installed.  One day the following week, City roads and drainage staff chipped and hauled the large pile of cut privet limbs to the City recycling and mulching facility. 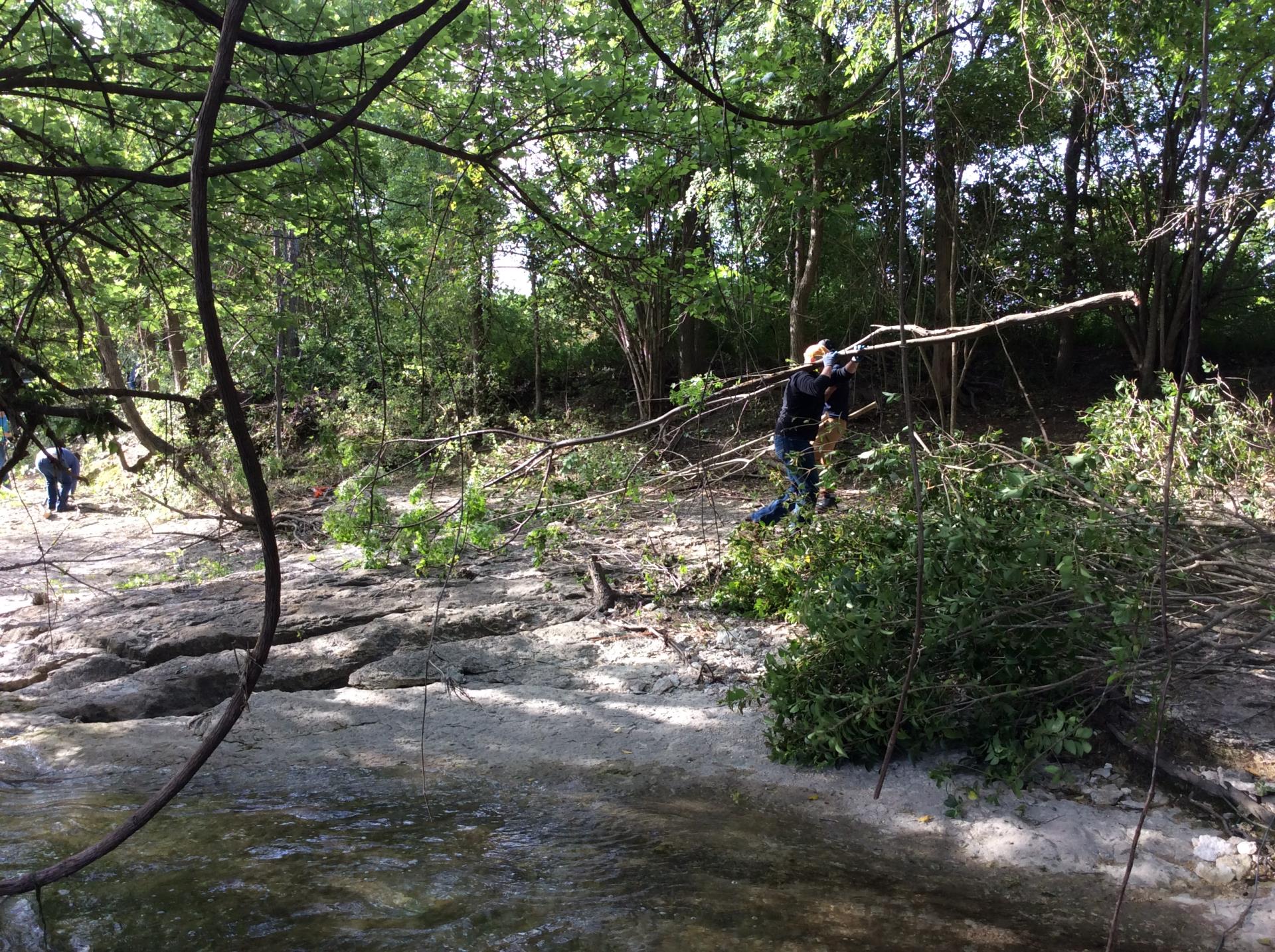 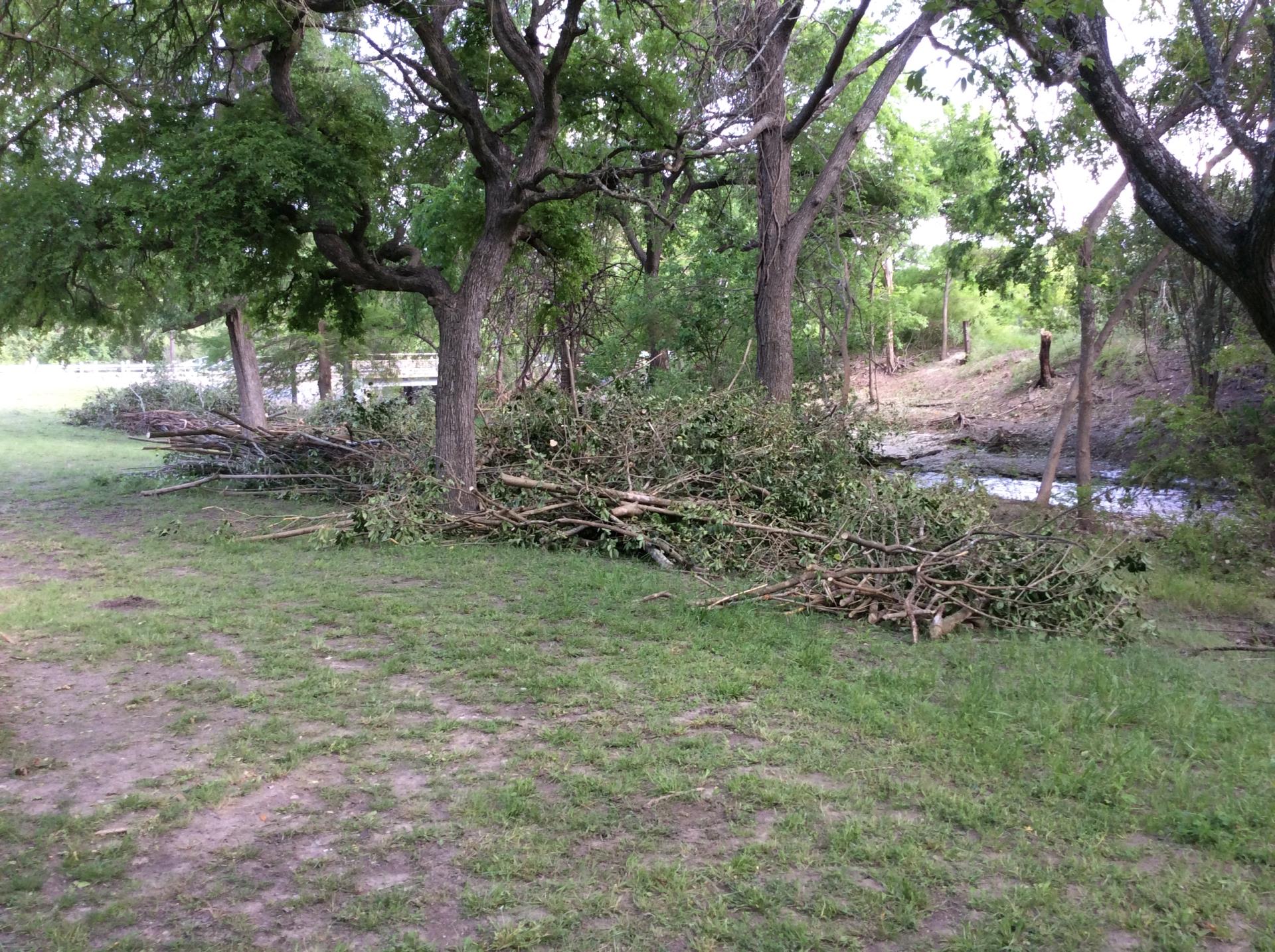 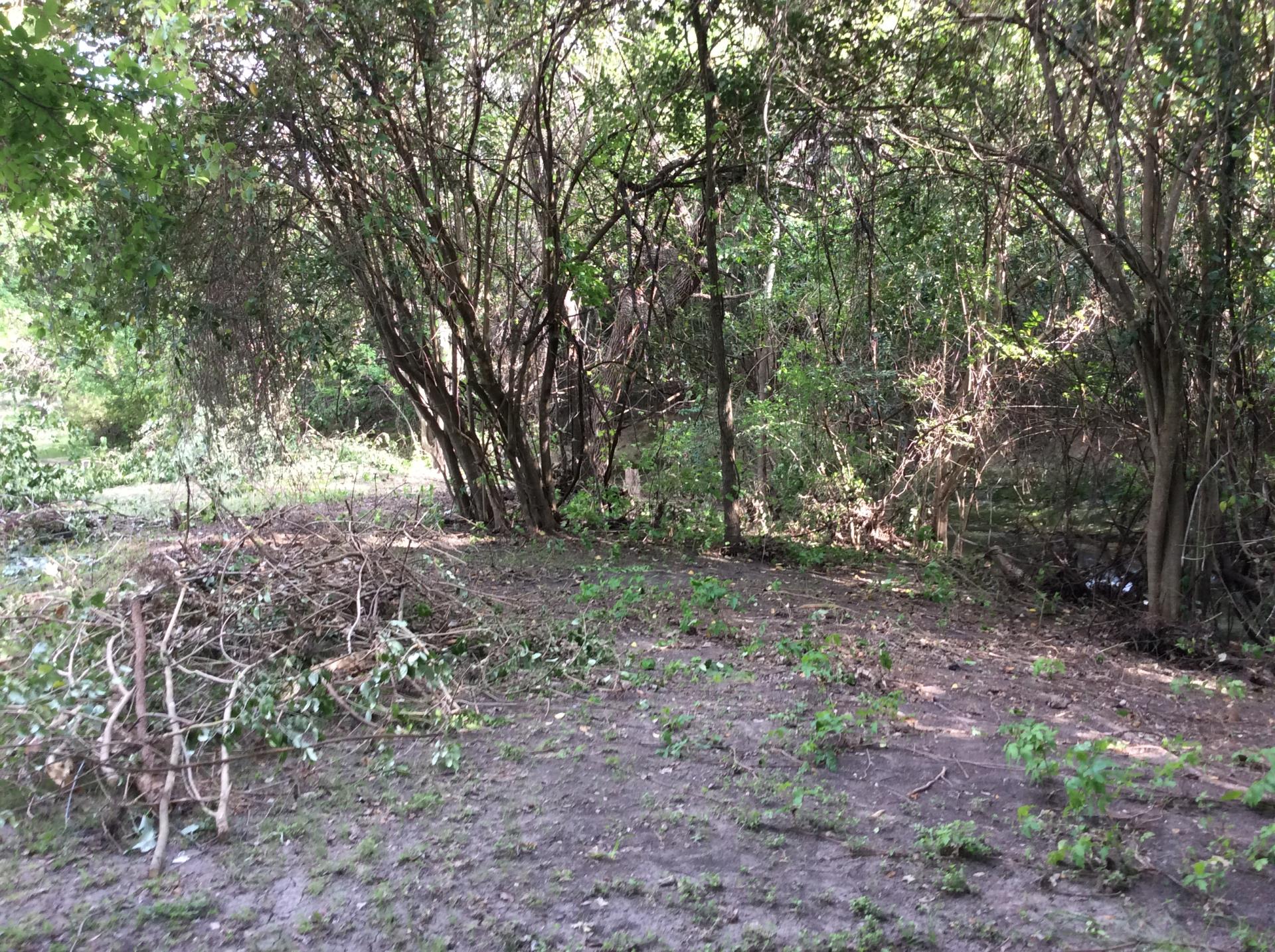 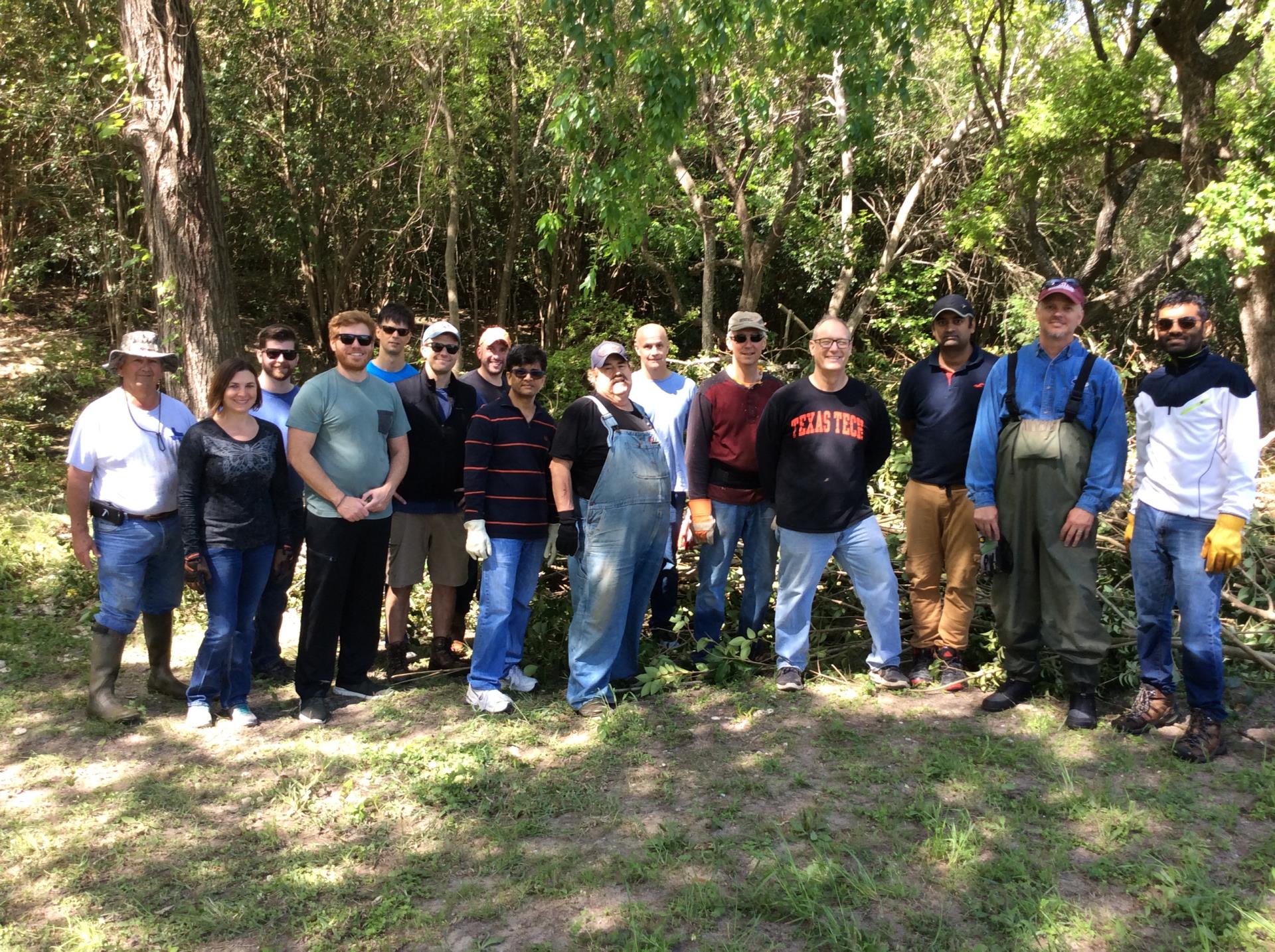 A Dell employee volunteer group of 13 individuals showed up to the third event involving the removal of Ligustrum, a.k.a. privet.  In addition, an American Legion Post 154 / Rotary member, the City Community Services Coordinator, and the City Environmental Specialist were involved with the privet removal.   Participants gathered and began the event in the Gilleland Creek Pool parking lot at 8:30 AM and completed work activities at 12:00 PM

Participants worked in a concerted effort removing privet along the north side of the creek starting at the Railroad Ave. bridge for a distance of approximately 200 ft.  Additional work occurred on the south side of the creek near the park pavilion for about 100 feet.  Tools used in the effort were weed wrenches, loppers, hand and chainsaws.  An All-Terrain Vehicle (ATV) equipped with a cable was used to move the cut privet limbs across the creek.  On April 15, 2019, City Streets and Drainage employees chipped and transported all of the cut privet limbs to the Recycling Center.  Grass seed including a riparian variety was spread along banks where the privet was cleared.

Postponement of the Public Meeting

Due to the need to provide more time to notify additional residents and stakeholders regarding the Gilleland Creek Riparian Restoration (GCRR) Project public meeting, a decision was made to postpone the meeting which had been scheduled for May 23, 2019 at 6 PM at the Pflugerville Recreation Center.  The City will make concerted efforts to inform the public of future decisions regarding the GCRR Project before "boots on the ground" actions are taken.

The GCRR Project was initiated for the purpose of addressing restitution to Texas Parks and Wildlife Department for a fish kill caused by City chlorinated water released to the creek.  The volunteer events that occurred on October 6, 2018, and November 8, 2018 addressed the restitution cost.  The volunteer events on March 8, 2019, and April 12, 2019 were conducted as part of a pilot project to reduce E. coli  bacteria levels in the creek, decrease bank erosion, and improve plant and animal biodiversity along the creek.

The GCRR project meeting is intended to inform the public regarding the reasons, plans and methods for restoring a diverse community of native vegetation along Gilleland Creek.  Once determined, this website and Pflugerville Facebook will post the future place, date and time of the meeting.